Jan. 7: Pulled their socks up

Everybody had a hard year? If we’re talking about the Beatles, that’s a fair appraisal just a week into 1969.

As rehearsals were set to get fully under way January, 7, 1969, the group openly discussed breaking up. Instead, moments later, they were trying to hammer out the details of “I’ve Got a Feeling” for more than 20 minutes before launching into an extended session dedicated to Paul’s pet “Maxwell’s Silver Hammer.” 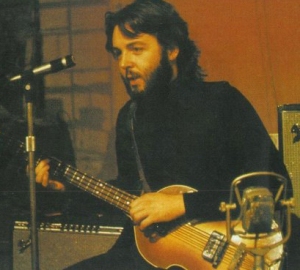 The out was right there for them; the group was in agreement that a divorce was not unreasonable. But while we don’t know for certain, (unless this particular discussion was filmed and we can see for ourselves if the footage is ever released), it doesn’t even sound like anyone moved out of their chairs, much less high-tailed for the exits. Paul left the band during the recording of “She Said, She Said” in 1966 and Ringo split during “Back in the USSR” in ’68. But this cry for divorce, so much more severe than a walkout of a single member, didn’t immediately lead to much of anything. Nobody budged January 7, 1969, after the early takes of “Get Back,” and status quo reigned.

As tension melts and the group trades chatter for chords, it quickly becomes clear little that had led to the group to the brink had actually changed.  Paul may not enjoy his role as band leader — “I’m scared of that, ‘You be the boss’” — but he’s not letting that job go, either, despite any prior protests from George or anyone else in the group.

Arranger/producer Paul made plain his preferences for “I’ve Got a Feeling,” and anything else they were to tackle going forward in preparation for the live show.

Paul certainly sweats the details and is quick to dictate the construction of the song, asking John to keep the chord sequence before the chorus “kind of tight,” barking “riff” to George at the appropriate times and working on the balance of “oh yeahs” with “oh noes.” Even Ringo wasn’t spared; he received explicit directions, too: “Don’t go into the swing at the end,” Paul said as he vocalized the closing drum pattern.

Overall, special focus was paid to the transition to “Everybody’s had a hard year” and the subsequent section. Paul pushes George to add “something recognizable” just prior to the bridge (“All these years I’ve been wandering around”).

The vibe, meanwhile, is generally agreeable throughout, and there’s certainly no indication that moments earlier the band was basically trying to figure out the right way to break up.  While no songs were particularly tight by this stage of the sessions, there’s a definite, steady progression here with “I’ve Got a Feeling, ” a song that had seen time each day thus far at Twickenham. The group works their way through at least one complete take (tape cuts, as usual, keep any claim here from being definite).

Content with the state of the song, and with a lengthy pivot to “Maxwell’s Silver Hammer” imminent, the band detours briefly into a pair of apparent improvisations that wouldn’t be heard from again (the bluesy “Woman Where You Been So Long” and the especially catchy, Little Richard-inspired “Oh! Julie, Julia”).

John cuts off the jam to ask Paul to launch into “Oh! Darling,” an admitted favorite of John’s up to his death 11 years later. Paul was again in instruction mode here — there was no solicitation for advice on working out kinks, rather the song was set and merely needed to be taught.

Paul had already played the song twice at Twickenham — both times solo at the piano for Lindsay-Hogg (“Sounds great, Fats Domino!” the film director said on the 6th), but it was without any further accompaniment and probably without the full band even in the building.  This is the first full-band take of the song, which, despite the need for Paul to shout out chords and generally sounding in a rough state, seems to have had at least some off-tape rehearsal at some point. With John’s enthusiasm for the song only helping the cause, it’s not unlikely to think “Oh! Darling” could have been a viable option for an extended live show, were it to have actually been staged. Alas, with the rooftop featuring Paul only on bass, and the setlist short, it wasn’t meant to be, but the song certainly found a happy home on Abbey Road.

“‘Maxwell’s’ would be even better to go on.”

Even Paul’s skeptical as the band readies to lay down the silver hammer.