Formal recording for Abbey Road wouldn’t come until months after the Beatles’ January 1969 sessions and not until the project was shelved along with its stable of new songs. It’s with the luxury of retrospection we can establish that the sessions served as a demo venue for Abbey Road, not a bad byproduct of the weeks in the studio.

To this point — the pre-lunch portion of the January 8 session — the Beatles had in one form or another performed six future Abbey Road tracks (”Maxwell’s Silver Hammer,” “Oh! Darling,” “Sun King,””She Came In Through the Bathroom Window,” “Golden Slumbers” and “Carry That Weight”) that were either contenders for the live show or simply unfinished bits for another day, if any.

“All Things Must Pass,” deplorably, didn’t make the cut on either Abbey Road or Let It Be. On this day, the final stabs at that Harrisong (which were the best ones to that point in these sessions, too) found John at piano, and it was there he re-introduced a future piece of the Abbey Road medley, “Mean Mr. Mustard.”

New to the Get Back sessions, “Mean Mr. Mustard” wasn’t at all new to the other Beatles, who had heard John’s demo for the song the previous May at Kinfauns. You, too, can hear it for yourself if you crack open your copy of Anthology 3 and pop in the first disc, or on the 2018 reissue of the White Album. Or just listen below!

Pretty earthy, but that’s the Esher Demos for you. Like “All Things Must Pass” and others, the influence of the group’s February 1968 India trip stretched far past the subsequent White Album. Back in Twickenham, Mr. Mustard’s sister was still Shirley, and he’s yet to rediscover his roots with Polythene Pam. Her sordid story will come later. First, we can enjoy John performing “Mean Mr. Mustard” at the Get Back sessions.

A bit more fleshed out with full instrumentation, the first 1969 take of “Mean Mr. Mustard” is roughly what it was nearly a year earlier, and not awfully far off from what it would become later on Abbey Road. It also stands as an alternate version of his work-in-progress “Madman,” which was a few days away from debut at these sessions. But the Madman’s story will come later, too.

Ultimately, John trashed the song, calling it, along with “Sun King” and “Polythene Pam,” merely “bits of crap that I wrote in India.”

But is one man’s trash another’s treasure?

All right, fine. Paul probably wasn’t inspired by this take of “Mean Mr. Mustard,” despite sharing bouncy piano chords, but it wouldn’t have been the first time a song drawn from these sessions would bizarrely resurface many years later.

Before breaking for a bite, the Beatles returned to another song that would later be separated only by one track on the Abbey Road Side 2 medley. The number had already had a few rehearsals over the last few days, but it finally was given its formal name on January 8.

Paul: I think it’s called “Bathroom Window” … But it’s funny. It doesn’t sound like a title. “She Came in Through the Bathroom Window.” 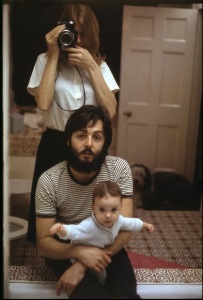 Paul, Linda, Mary and Martha in the bathroom, 1969. The window is out of frame.

An earlier stab at a rehearsal never materialized, but after the Beatles spent about a half hour focusing on “All Things Must Pass” and John’s quick “Mean Mister Mustard” detour, the “Window” was reopened.  “Do you want to stay on that for ‘Bathroom Window?'” Paul asked John, who was still at the piano. He did, and it marked the third consecutive day the group spent time on the song.

Mentioned previously in this space, one delight of the Twickenham takes of “She Came In Through The Bathroom Window” is the chance to hear Paul harmonizing with John on the song. Remember the Abbey Road version features Paul double-tracked.

Still, it’s hard to call these takes ultimately pleasurable. After some brief instruction, we hear three total takes of the song, with the first two dragging to the finish. The final take is a bit livelier. Unlike other McCartney compositions in the first week of the sessions, the song is indeed complete, though, with the same lyrics, melody and general instrumentation as we’d hear on Abbey Road, once that blessed day would come.

Now with “Mustard” on the table and the “Window” closed, the Beatles adjourned, quite appropriately, for lunch.