While the Apple Corps board meeting at Ringo Starr’s house is the obvious focal point to the Beatles’ January 12, 1969, there was more to the day’s agenda than the important aborted gathering.

“This peculiar arrangement allows the management to offer you a large choice of interesting films” (from a January 9, 1969, ad for Cinecenta)

That evening, Wonderwall — the film which bore George Harrison’s excellent solo debut as its soundtrack — enjoyed its British premiere at London’s Cinecenta. George, who had walked out of the Apple meeting that day, didn’t attend the premiere, which also served as a sneak preview for the Panton Street theater, Europe’s first four-in-one cinema.

Rather, George spent the evening at the home of Apple press officer and close friend Derek Taylor, a fact detailed in George’s diary. Mal Evans, who did it all for the Beatles, whether it was running errands or helping with lyrics or banging silver hammers, went to the movies instead, presumably as George’s representative.

“I went to the premiere of Wonderwall last night,” Mal told the others, unprompted, early on the January 13 Nagra tapes. He said he liked the film, even though it  “really got slayed in the papers.”

Ringo, who in May 1968 joined George at the film’s world premiere at the Cannes Film Festival, added, “I like the film too. After a couple of times, is that what you were going to say? First time was a lot.”

After the film, which was screened in all four theaters, Mal — resplendent in bow tie — enjoyed the crowded reception, including ice cream afterward.

Zeppelin’s self-titled debut LP hit American shops on January 12, 1969 (it came out in the UK in March), and that certainly would have made it a big day for Glyn, its engineer.

A few weeks after this date, after George had returned to the band and rehearsals shifted to 3 Savile Row, Glyn tried solicit the Beatle’s opinion on the fledgling Zep. George seemed more interested in lunch, but it’s still a neat moment in rock history.

At a 2014 Q&A to promote his memoir, Glyn said when he did finally get to play some of the LP for George, the Beatle “didn’t get one bar of it” (Mick Jagger wasn’t impressed either).

The Led Zeppelin release may not have even the biggest news for Glyn on January 12, although admittedly that’s just speculation. On the Nagra tapes recorded the next day, Glyn tells the others for the first time that he and his wife were expecting. So maybe she reached a certain point in a healthy pregnancy that weekend that made them feel comfortable to share the news starting Monday.

“Did I tell you my wife’s definitely confirmed pregnant?” he told Ringo, Michael and the other early arrivals.

Big brother is watching?
After the meeting at Ringo’s, Paul spent time with Apple head Neil Aspinall, discussing an explosive idea for the Beatles’ proposed live concert. Did Paul have time for someone else’s concert that same night? 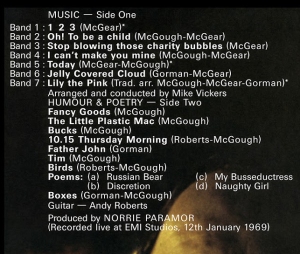 Some books place Paul at EMI Studios that night, but it’s hard to confirm just how many McCartneys were at the Abbey Road studios. There’s no question The Scaffold, featuring Paul’s brother, Mike McGear, recorded portions of their L. The P. album there that evening. There’s also no question Paul provided the guitar for two of that album’s tracks — and he recorded those in subsequent months. Side 2 of the LP, all humor and poetry, was recorded live before an audience of London University students that Sunday, and it’s feasible Paul was also in the crowd.

Paul lived a short walk from EMI, but it would be a surprise if he went the show yet didn’t mention it the next day on the tapes, considering how much detail of their lives they did share.

Sitting on a sofa on a Sunday
Michael Lindsay-Hogg was stuck to the television Sunday night, when he was tuned to the Andy Williams special on BBC-2. An hour-long show featuring several performers and beginning at 7:25 p.m., the “H. Andrew Williams Kaleidoscope Company” originally aired in the U.S. in April 1968, but was first-run to British audiences in January 1969. 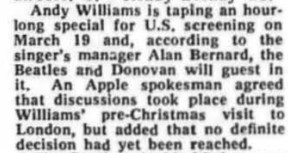 While Andy Williams featured a Beatles number in the dizzying opening sequence and was presently rumored to be in line to host the band on his TV show in the coming months (see the adjacent clipping from NME), the American crooner wasn’t discussed at all on the Nagra tapes the next morning.

Instead, Simon and Garfunkel, who had four LPs among the top 26 in the UK for the period beginning January 12, 1969 — including The Graduate, which sat at No. 4 — sparked the most conversation, again, primarily from Michael.

“On Mrs. Robinson, they were camping it up, which I didn’t like, because Paul Simon is not that good at it,” Michael said, before continuing. “He’s got a great face, Art Garfunkel.”

“Is he the frizz?” asked Ringo.

Michael confirmed Garfunkel was the frizz, before unexpectedly offering that he had “a very long, involved story about how Paul Simon and I don’t get on, but it’s too long and involved. … It’s funny, I’ll tell you sometime.”

(We never hear the story, but their issues must have eventually been ironed out, because Michael directed the Simon & Garfunkel reunion in Central Park in 1981 and later got his big African concert, directing Simon’s historic 1987 Graceland concert before a huge audience in Zimbabwe.)

There was another act on the Andy Williams show that drew interest.

It’s a good question, and one unfortunately left hanging, as they moved onto other topics before anyone answered.

If anyone had, in fact, seen Ray Charles’ segment, they could have caught a fleeting glimpse of his organist: Billy Preston.