It was becoming clear by the end of January 9, 1969, that the Beatles would end up opting for ad-hoc over adventure.

A lengthy discussion the night before found all four Beatles showing varying levels of willingness to travel by boat to Africa for a one-off show, and some sort of decision seemed imminent. With the planning needed and a schedule to keep before the band lost Ringo Starr to an imminent acting assignment, it had to be.

But after the group slept on it, pinning down a consensus was just a dream. Any momentum to raise anchor dissipated among the members of the band, despite the continued best efforts of director Michael Lindsay-Hogg to ship the group to a Roman-era amphitheater in Libya.

There was no grand discussion about the show on this Thursday, just a series of short conversations sprinkled about the day among the various principles. The Beatles were making musical progress at Twickenham Film Studio, and as the Nagra tapes proved, the overall mood was fine, certainly better than it had been a couple of days earlier. But there was no great enthusiasm for travel, and it often seemed like settling on a venue was a binary choice: Twickenham or outside Tripoli, by boat — the devil (they know) or the deep blue sea.

“If we do it here, then we’ll do it in here,” director Michael Lindsay-Hogg told Paul McCartney’s girlfriend Linda Eastman on her January 9 morning visit to the soundstage. “But if we don’t, it’s on a boat to Tripoli,” said Paul.

“Ordinary people like themselves.” On the Mad Day Out on July 28, 1968, the Beatles mingled with the British crowd at St Pancras Old Church and Gardens. Less than six weeks later, they filmed the “Hey Jude” promo film. (From Meet The Beatles For Real)

“There’s many a story,” Paul replied.

“What will you do with all the equipment?” Linda asked. “Get it on the boat,” replied director Michael Lindsay-Hogg. “That’s what Apple’s for, really, isn’t it?”

Discussions over the show circulated around these unresolved issues: Where would it be staged, what would be its format and who would be the audience. Thus the seventh day of the session was not much different than the first, and it wasn’t even a matter of agreeing to some aspects and then pursuing another. Every aspect of the show was in flux, and every suggestion was repeated.

Airports, apartment houses, cathedrals, the Houses of Parliament — these venues were considered before and mentioned yet again on the 9th, along with a transformed Twickenham. Transformed how? That wasn’t elaborated.

The boat, which was brainstormed at length the night before, was in play. But Ringo, while never issuing his veto, was clear in his distaste for a trip to Northern Africa, much as that was Michael’s preferred and planned choice. A continued sticking point was the his loyalty to a British — or American — audience. Ringo cited long-running talent show Opportunity Knocks as an example to follow in ultimately challenging that mundanity transcends spectacle, obscurity over celebrity — at least when it came to the spectators.

“Just because he had granny on the show, someone’s mother, and they only win because audiences like to watch ordinary people like themselves. That’s one of the things to do it here. Because English people — and Americans — and the two main people, at least they can associate with them and say, ‘I could have gone there.'”

MLH: The only thing is, I really do think it’s going to be for the world.
Ringo: The biggest part of our world is America and [here].
MLH: But funnily enough, I think the way they think of you is not only for themselves but they do think of you as for everybody in the world. That was one of the things things that was good about Jude, the guy in the turban. ….

Unfortunately, the tape cuts off during this dialogue, but we can assume it’s much of the same conversation that we’ve heard before with similarly little resolution.

(For the record, Opportunity Knocks provided Apple Records with one of its greatest success stories: Mary Hopkin’s winning performance in May 1968 directly led to her signing with the Beatles’ label).

Still, Michael was planning as if he could sway Ringo eventually.

“I think we spend till the middle of next week here or til the end of the week, go out on the and the following weekend. That’s eight days,” Michael said.

Ringo: Too long.
MLH: Go out on Sunday and finish it on Sunday.
Ringo: How about Sunday and finish it on Wednesday? Who wants to stay in Tripoli?
MLH: Denis (O’Dell, film producer), isn’t Tripoli a great country?
Denis: It’s the asshole of the world there. (Laughter)
MLH: You didn’t take my feed!
Denis: Look, I have to work with him the next six months and therein after! (More laughter)

Denis next related a story of how Ringo “saved his life” in India, thanks to the drummer’s cache of Western food he left behind when he returned to England. “[I] went back to Ringo’s room and I was rummaging around … found some powdered milk and baked beans, and it was a feast. … The stuff that you and Maureen left, and that’s what I lived on secretly.”

Uncommitted as they were to a destination for a live show, the Beatles comfortably and casually addressed the composition of the gig itself. 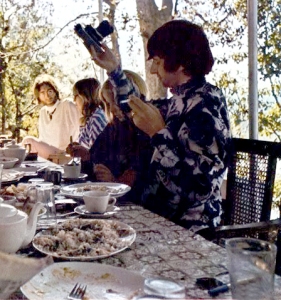 The band discussed staging issues (“It is a bit silly to be rehearsing sitting, facing this way, when we’re actually to be playing standing, facing that way”) and between-song banter (“First chance we’ve had to play for you dummies for a long time”) — see Jan. 9: Jokes in between for more on that.

“Is Michael around?” George asked at one point. “If we are in a groovy location place, and if there’s just people there and we’re just playing anyway, [can] we make the show about different bits and pieces of what we’ve done or [do] we have to do it in one consecutive piece?”

John: We do both, you see. We set one way when we say, ‘This is the show,” But we do, like, a dress rehearsal and another rehearsal.
George: (Laughing incredulously) Dress rehearsal?
John: Well, you know, we do it as is, we try and do it one through. We should do it about three times, and probably the middle one will have the most. And see if there’s anybody around that played piano or anything we just get him up, and let’s have a gig.

John told the future well, unaware at the time Billy Preston would be that piano player. John also didn’t realize that the man he was speaking to would walk away from the group the next day.