With birthday posts previously produced for Paul McCartney, John Lennon and George Harrison, it’s about time we righted a wrong, and completed the set with the man born as Richard Starkey. Like the others and in the spirit of this blog, here’s a look at Ringo Starr’s life as it straddled the big days circled on the calendar in 1968 and 1969. 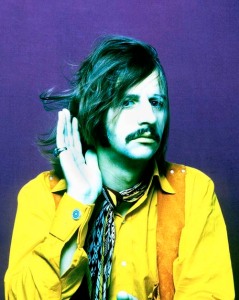 How did you spend your 29th birthday? Ringo Starr, the eldest Beatle, spent July 7, 1969, at EMI Studios on Abbey Road — like he spent so many of days in his 20s — laying down the drum track for “Here Comes The Sun.” We’ve all been stuck working on our birthdays, but this doesn’t sound like a bad gig, if you can get it.

Yet, 11 months earlier, Ringo gave up that gig, walking out on the Beatles during the White Album sessions.

From the Anthology book:

I left because I felt two things: I felt I wasn’t playing great, and I also felt that the other three were really happy and I was an outsider. I went to see John … I said, ‘I’m leaving the group because I”m not playing well and I feel unloved and out of it, and you three are really close.’ And John said, ‘I thought it was you three!’

So I went over to Paul’s and knocked on the door. I said the same thing: ‘I’m leaving the band. I feel you three guys are really close and I’m out of it.’ And Paul said, ‘I thought it was you three!’

I didn’t even bother going to George then. I said, ‘I’m going on holiday.’ I took the kids and we went to Sardinia.

He famously returned two weeks later after to a flower-covered drum kit as the sessions continued (they never stopped recording, with Paul filling in on drums for a few songs).

Still, Ringo’s time away was fruitful, spent on Peter Sellers’ yacht, where the captain told him stories about octopuses on the seabed.

A couple of tokes later with the guitar — and we had ‘Octopus’s Garden’!

Ringo’s relationship with Sellers — a member of The Goon Show, beloved by the teenage future Beatles, and whose novelty records had been produced by George Martin — dated back a few years and would benefit the drummer in several ways in the decade’s final years. In November 1968, Ringo took advantage of a Sellers’ market, moving into the actor’s former Brookfield House estate in Elstead, Surrey. Just a couple months later, the two would co-star in a movie. But first, Ringo had another movie to film with the Beatles.

Ringo’s resistance to go abroad during the Get Back sessions — he was most insistent of any of the Beatles — led to the beauty of the rooftop performance. This blog’s entire purpose is to tell that story.

Musically, Ringo did Ringo things in the January 1969 sessions, and as a songwriter, he continued work on “Octopus’s Garden” (as seen in the Let It Be film) and also brought a few unfinished songs to the table, too.

But the sessions were just a warm-up for what came next at Twickenham Studios, where Ringo — teamed up with Sellers — filmed The Magic Christian, his first true starring role (Ringo had a small part playing a Mexican gardener in Candy, which was released in this period, too). This took time, with filming running from February into May. The film would be released in December 1969.

Let It Be — the film and the record — wouldn’t see a release until 1970, a few months before Ringo turned 30. But the Beatles weren’t finished yet in the wake of those sessions. “Octopus’s Garden” would be formally recorded in April 1969, although recording for Abbey Road, to this point sporadic, wouldn’t get into full swing until July.

In December 1969, Ringo said in an interview with the BBC that “I want to be a film actor. I don’t want to be like Cary Grant or one of them who, like, really do the same performance in everything, and the story is the only thing that changes.”

Ringo & Barbara at their wedding

That may be the biggest takeaway in the career of Ringo Starr between July 7, 1968 and 1969 — because he did look at life beyond, or at least in addition to, the Beatles and rock and roll. Without the songwriting gifts of John, Paul and George, Ringo applied his natural charm to film, and was finally able to step fully out into the spotlight and marquee, without other Beatles to his side, or front. And while he was successful in the early 1970s with his solo career, he remained active on the screen, too, even if it wasn’t to that same critical or commercial success.

If you judge success by the bigger things in life, however, Ringo’s foray into film couldn’t have been any more fruitful. A few months before his 40th birthday, in 1980, Ringo filmed Caveman, starring alongside model Barbara Bach. After meeting on the set, they would wed a year later, and have been together ever since.